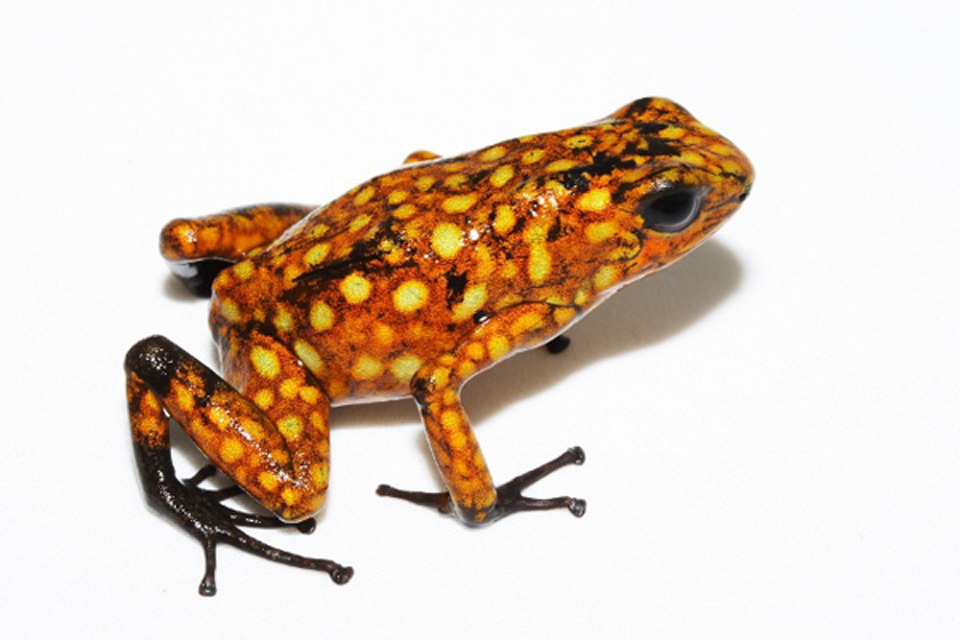 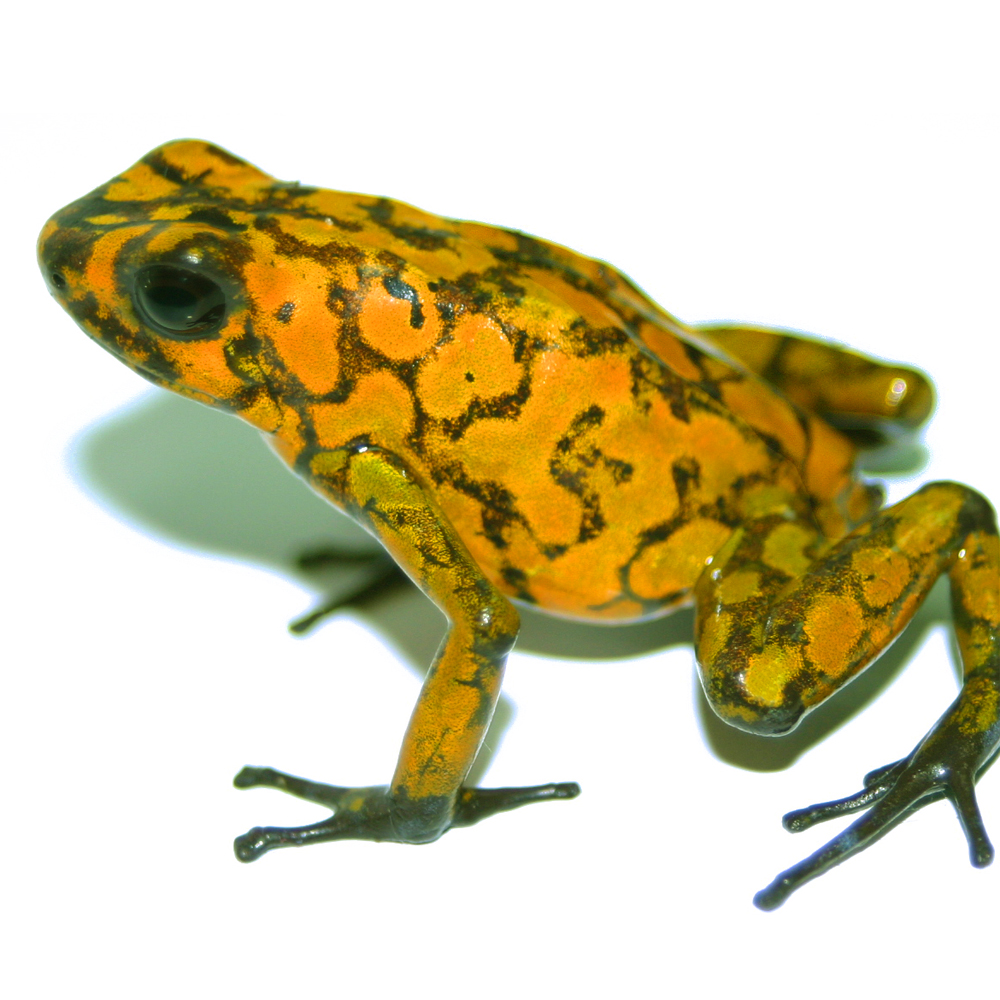 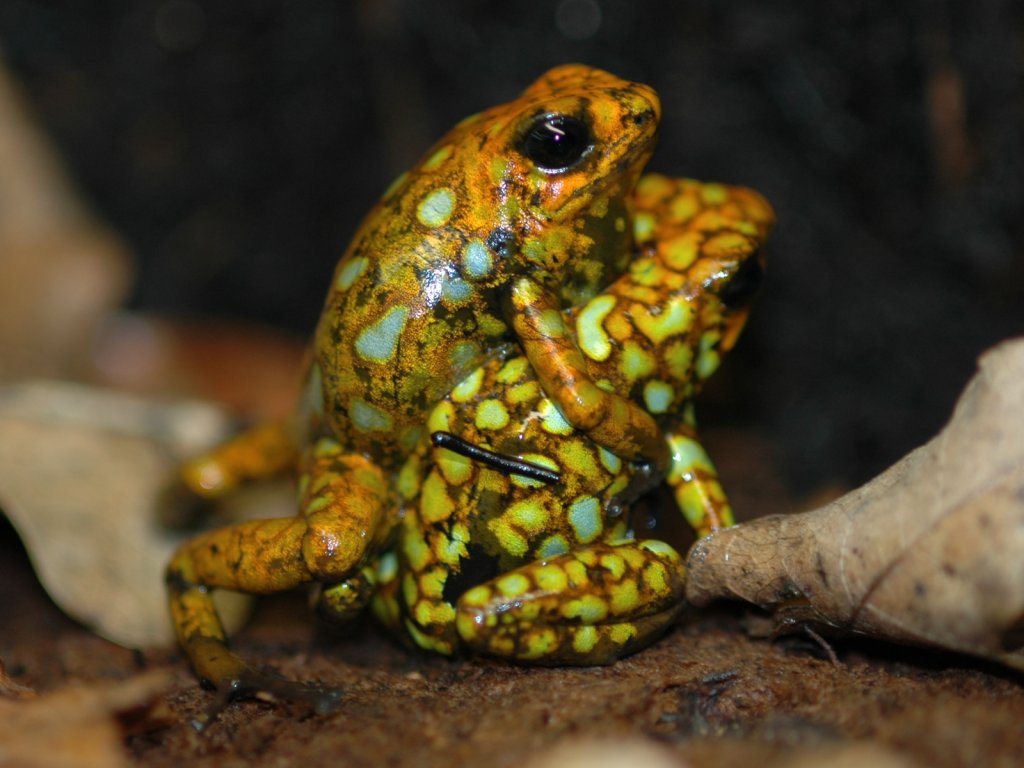 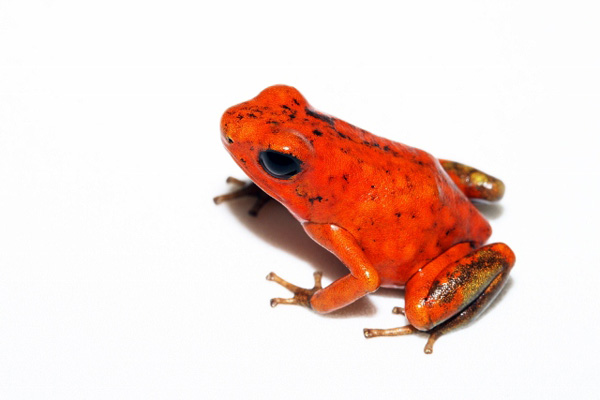 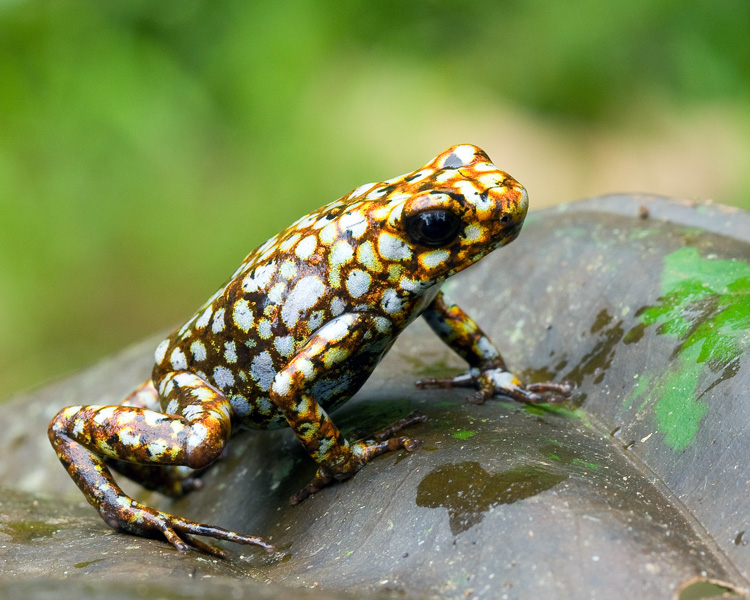 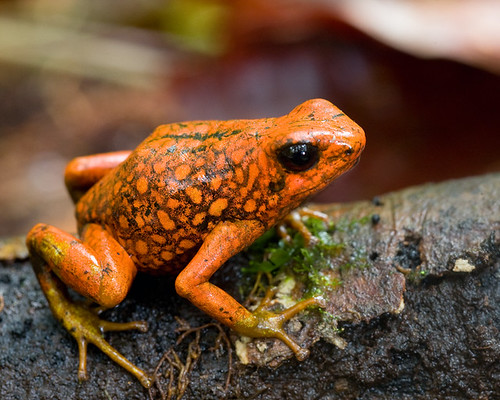 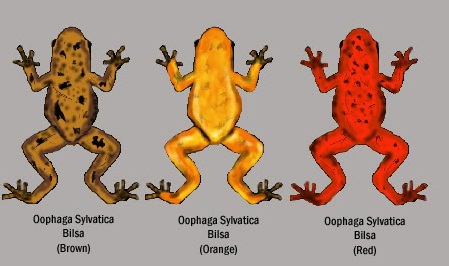 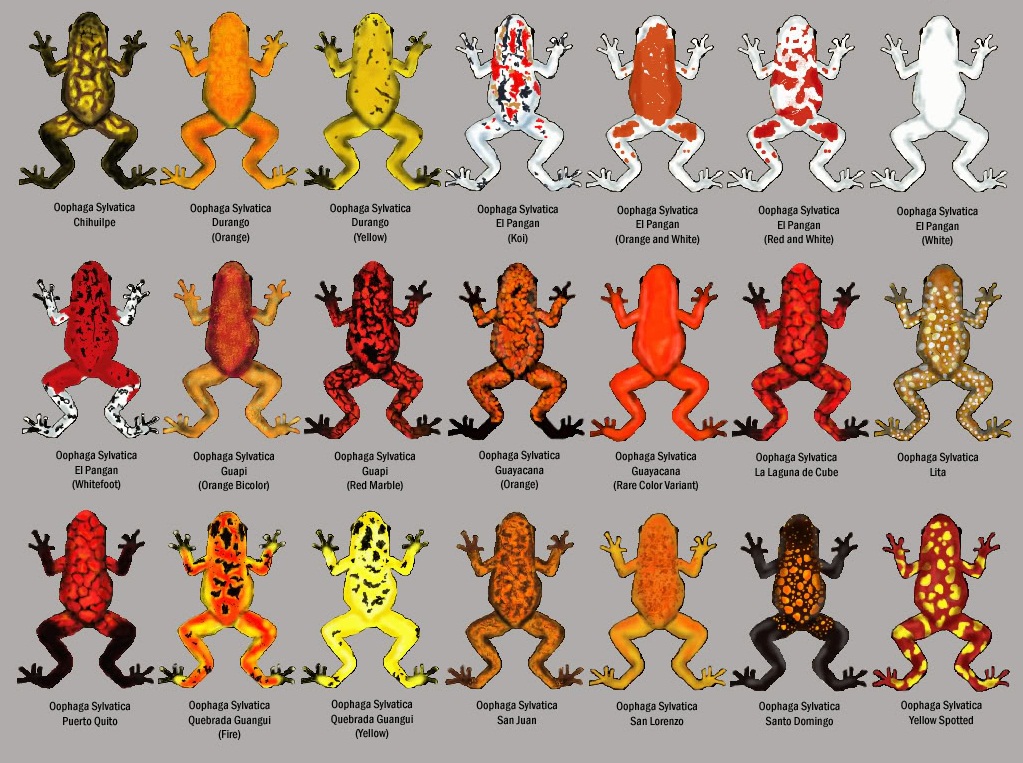 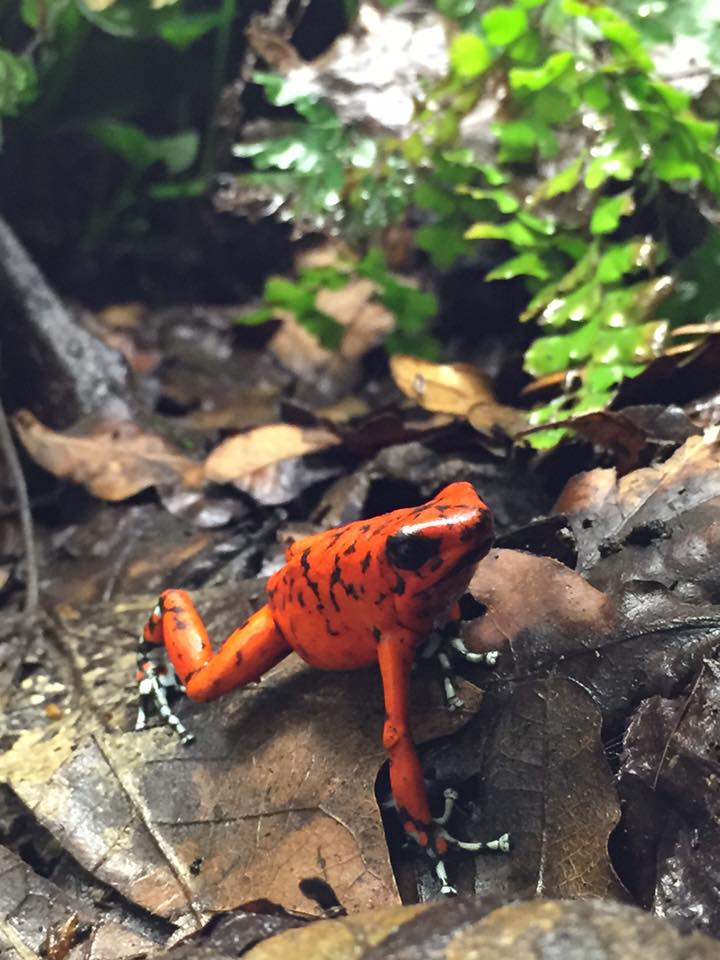 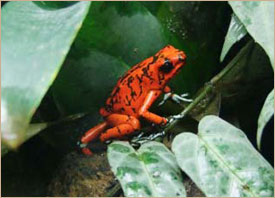 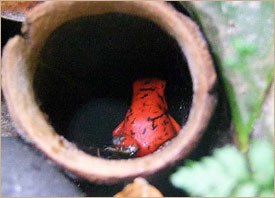 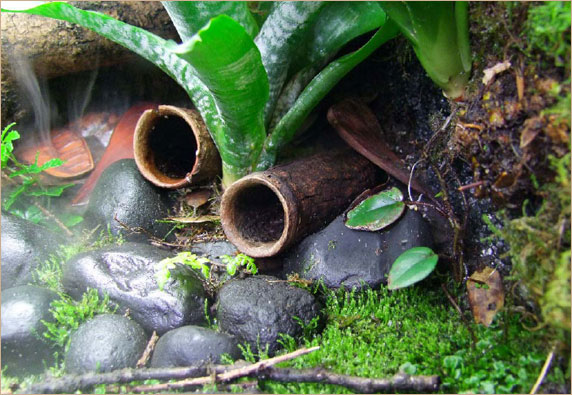 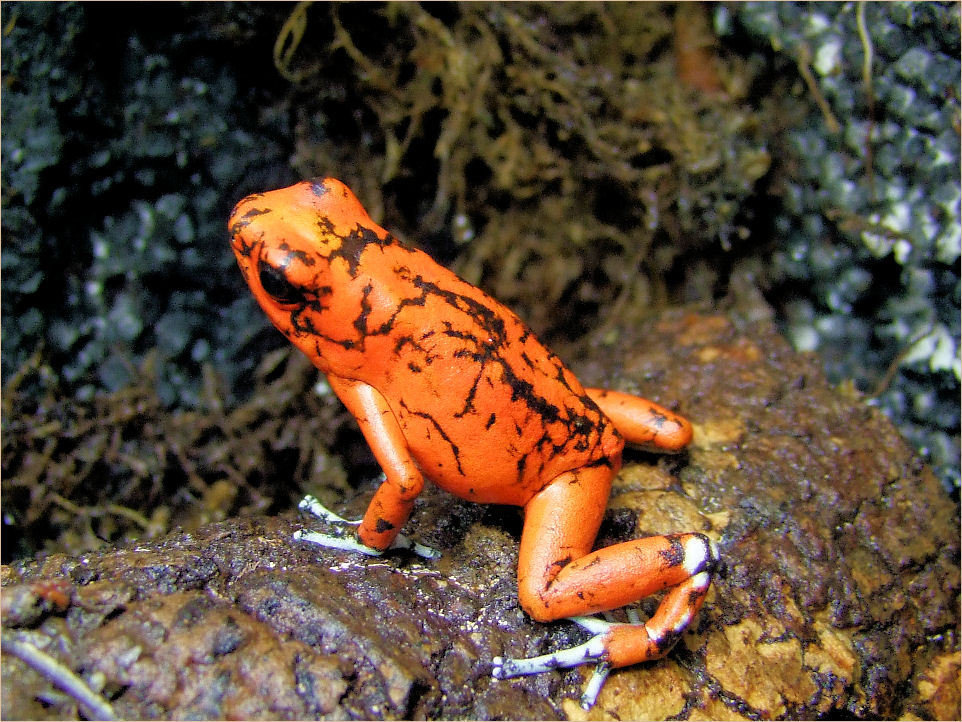 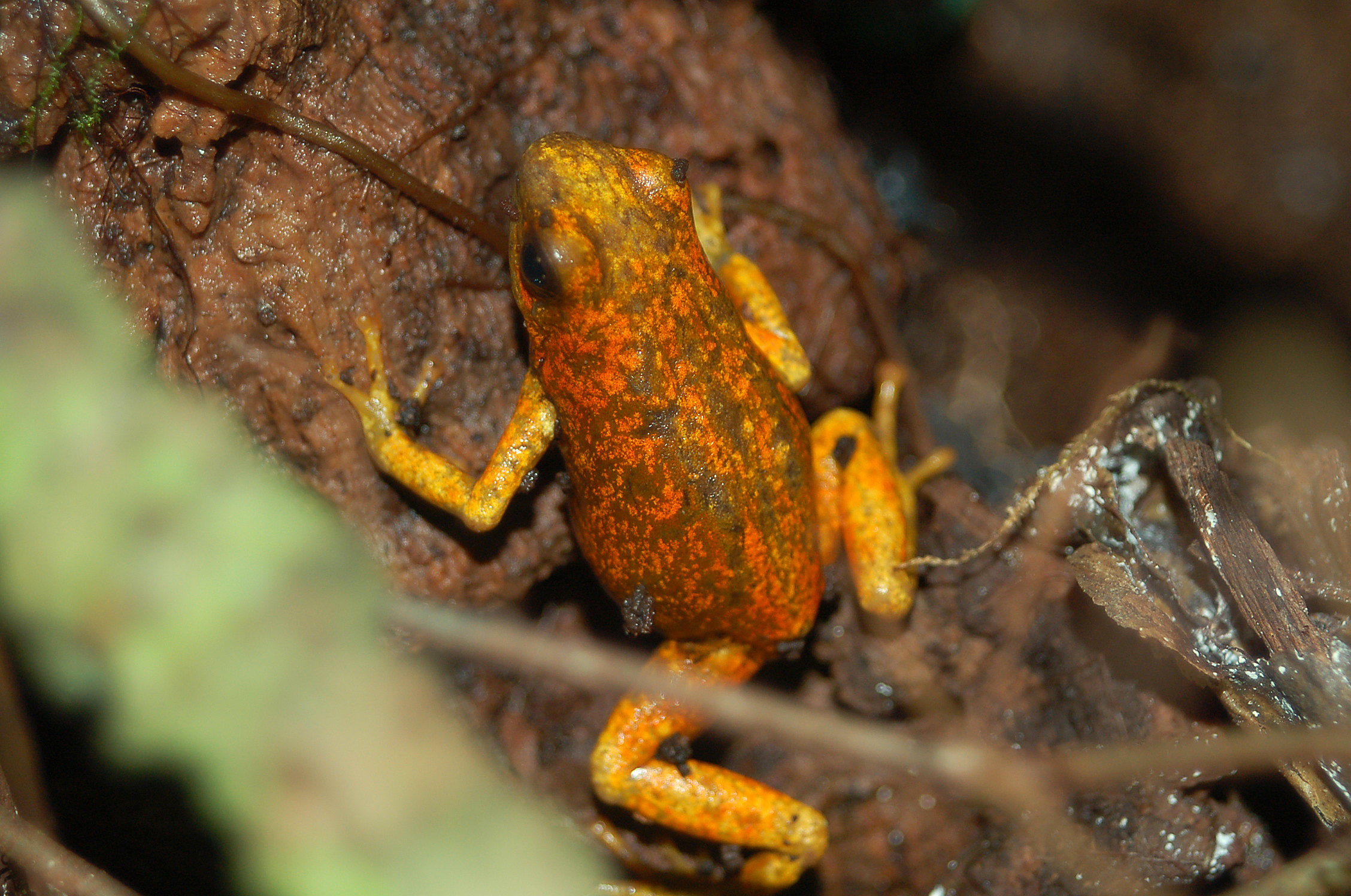 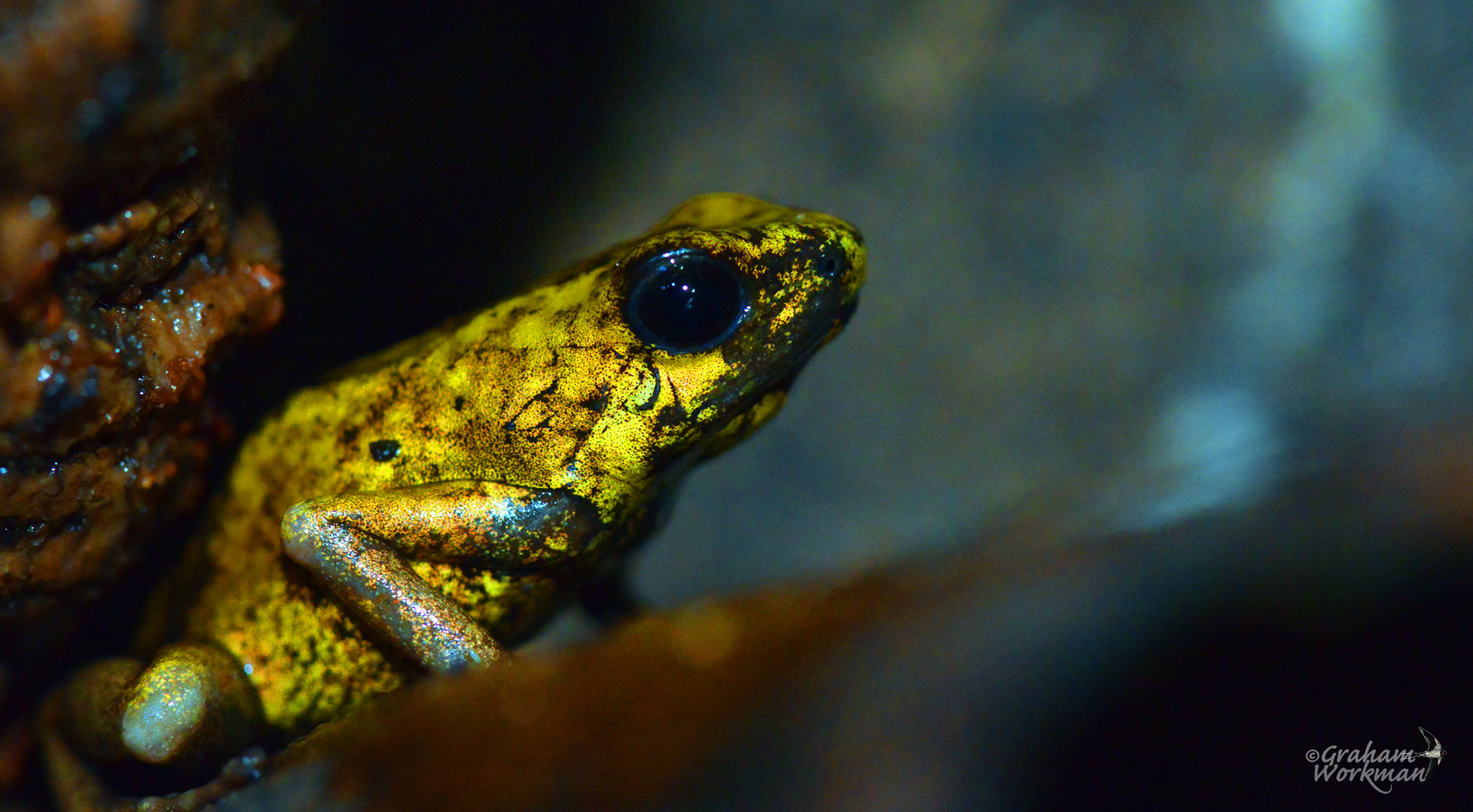 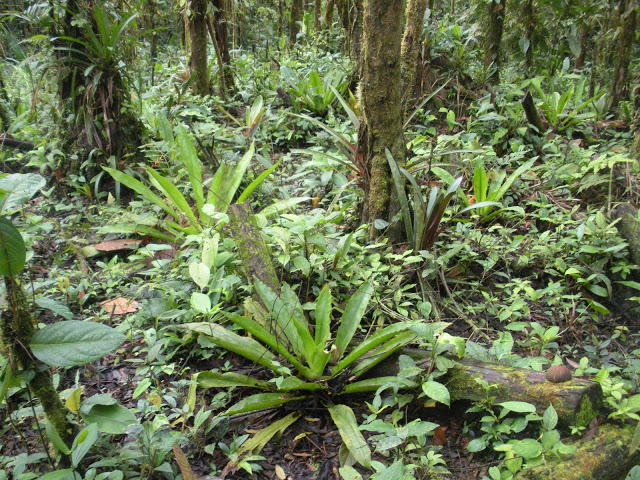 Enriched habitat at the Otokiki Reserve

Ground section
There has been much speculation within the dartfrog hobby about the diverse colour and pattern range of the Paru morph.
The founding stock of our ‘Paru’ originate from the Otokiki Reserve in Ecuador via WIKIRI. The Otokiki Reserve is located on the Pacific side of the Andes near Alto Tambo in the Esmeraldas province of the Chocoan region. The reserve is situated in a high risk region due to a number of factors including: the presence of trespassing forces from Colombia (FARC), as well as other paramilitary forces; the current presence and development of gold mining that is devastating the forest and destroying and contaminating the river courses; the presence of drug trafficking activities that destroy the forest for illegal harvesting; the continuous deforestation caused by the timber industry and agriculture including the expansion of African palm monocultures.

Here is some information provided by Mark Pepper of Understory Enterprises
This represents years of work and a monumental effort by WIKIRI and some pretty world-renowned Ecuadorian biologists to make this happen.
Historically the entirety of the Ecuadorian Choco would have enjoyed sylvatica distribution, with one population naturally running into another in many places, probably a slow transition from morph to morph throughout much of Esmeraldas, Imabaru, Carachi and into Colombia.
Geographically, Alto Tambo and the Otokiki reserve where these “Paru” frogs originate is situated between Lita which is located to the south east and San Lorenzo to North west. The hobby is long familiar with both frogs from near Lita, and those from near San Lorenzo. These Paru frogs, naturally are variable and express some morphological traits from both of these aforementioned neighboring populations. This is to be expected as there is no major naturally geography to isolate these populations. Resource extraction, in many forms has resulted in the isolation and reduction of many pupulations and ranges, but this is a rather recent phenomenon.
Most of these frogs are red/orange to caramel base colour with some hints of yellow spotting on the dorsum. A few lack the spotting and are more uniform in colour, while others have more pronounced spotting. The situation here is no different than what is often seen with pumilio from Isla Bastimentos, the Red and Blue Escudo situation, or variability that is naturally present in many Dendrobatid populations. These are not hybrids between two distinct species as is the case with lehmanii and histrionica hybrids.
WIKIRI is working on a much more detailed informational release, which will in much more detail summarize their work, the conservation, research, and educational work that will benefit from the export of these frogs. As soon as that is ready, we will publish it online.

Insight into the natural variation of frogs of the “Paru morph” Oophaga sylvatica (Anura: Dendrobatidae)
Individuals of the the Paru morph of Oophaga sylvatica exported by Wikiri are the offspring of a parental population from the Otokiki reserve (143 acres of tropical rainforests of northwestern Ecuador). Otokiki reserve is located in the Alto Tambo region (Esmeraldas province) at an altitude of about 700 meters above sea level.
The amount of color pattern variation within this Otokiki population, which occurs naturally, is perplexing. See figure depicting variation of wild-caught adult individuals at one of the study sites in Otokiki. All individuals found in a preliminary sampling are included, but additional sampling might reveal more individuals and variation. 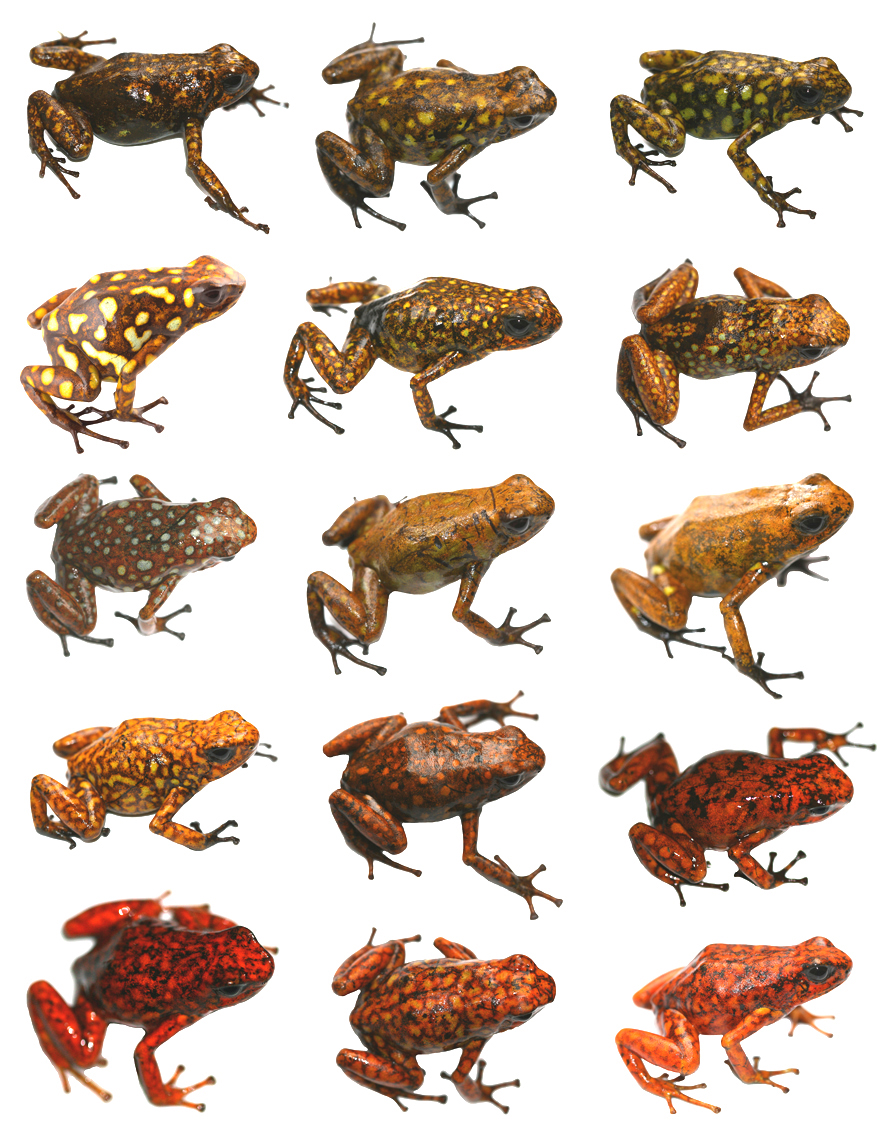 At Otokiki, similar large variation in colors and patterns is represented in quadrats under management by Wikiri (three habitat-enriched semiclosed enclosures, one enriched open quadrat), and in one control (not enriched) quadrat. Also, we have documented a great amount of intrapopulation variation at other sites in Esmeraldas province, for example, towards the east of Alto Tambo at Guadal (near Lita, Esmeraldas province). Less color pattern variation is seen in lowland populations at Durango and Playón de San Francisco, which display more uniform colors.

How to interpret this variation and what are it’s causes?
Underlying causes of this intrapopulation variation of the Paru morph are largely unknown and currently are a matter of speculation. For now, we are reluctant to interpret this variation as the result of hybridization —a phenomenon that can occur between species as a result of primary or secondary contact (after a period of isolation). Underlying factors behind the observed variation probably lie in the evolutionary history of this population. The historical human intervention in the area could have played a role as well, but the variation is not a consequence of Wikiri manipulation.
Understanding the mechanisms that promote intrapopulation divergence (such as the one observed at Otokiki reserve and surrounding areas) and interpopulation divergence (such as the one among populations of O. sylvatica in the pacific lowlands of Ecuador and Colombia), and ultimately speciation, is one of the most challenging and intriguing tasks in evolutionary biology. Geographical barriers, ecological gradients, genetic drift, and sexual selection are the main mechanisms (currently speculative for O. sylvatica populations, as mentioned before) invoked to explain these processes, which are shaping the variation observed.
Centro Jambatu has begun a research program and study projects on the evolution of coloration, morphology and behavior within and among populations of Oophaga sylvatica. The program is a cooperative effort between Ecuadorian and USA researchers. We will be doing field, molecular, and experimental work. The Otokiki population will be critical for our understanding of coloration evolution because of its huge variability.
For a better understanding of this variation and its evolution, we need to conduct fine-tuned studies including morphological descriptions in relation to behavior, geography, and molecular population genetic structure. Also, we need to conduct lab controlled experiments to see the consequences of color variation. We will need to set up crosses between color morphs in order to identify color specific SNPs (single nucleotide polymorphisms) and then examine the expression bias of parental alleles in the offspring. We will study behavioral issues and also we will address questions of color determination.
Finally, we think that the hobbyists industry and people who love these frogs should appreciate the unique opportunity and monumental effort done by Wikiri in providing farm and captive raised frogs from a population that displays such a great intrapopulation variation, which include dull and bright colored individuals, spotted and non-spotted frogs, orange, red, yellow and brown colors. Hopefully this variation can be preserved at the site (Otokiki) and region of Alto Tambo. Backup populations under care of hobbyists are also important as an ex situ tool helping integrative conservation strategies.

“As the temperatures are rising beyond the thaw around much of the Northern hemisphere we thought it was about time to release a brand new– and for the FIRST TIME EVER 100% LEGAL– form of Oophaga sylvatica.

This stunning morph is one of the larger forms found here in Ecuador and is a stunning mix of orange mottled with black, with milky white feet.

We call this the “Pata Blanca” form, which in Spanish refers to the white on the limbs.

We realize there has been illegal trade in a form referred to as “White Foot” but please be aware these are from a completely new region discovered by researchers at WIKIRI, and we strongly encourage you to maintain the name “Pata Blanca.”

Unfortunately, this morph has not been one of the most productive populations; thus now, and for the foreseeable future, our supplies will be VERY LOW.

We here at WIKIRI want to ensure our frogs thrive in the hands of their new owners and we are constantly trying to improve our practices to ensure this.

As a result we are offering these frogs at a generous 3-5cm (>1″ – 2″) size– which also contributes to the severely limited availability.

Please preorder immediately with one of our distributors to be added to the list.

As always we thank you for your continued support” 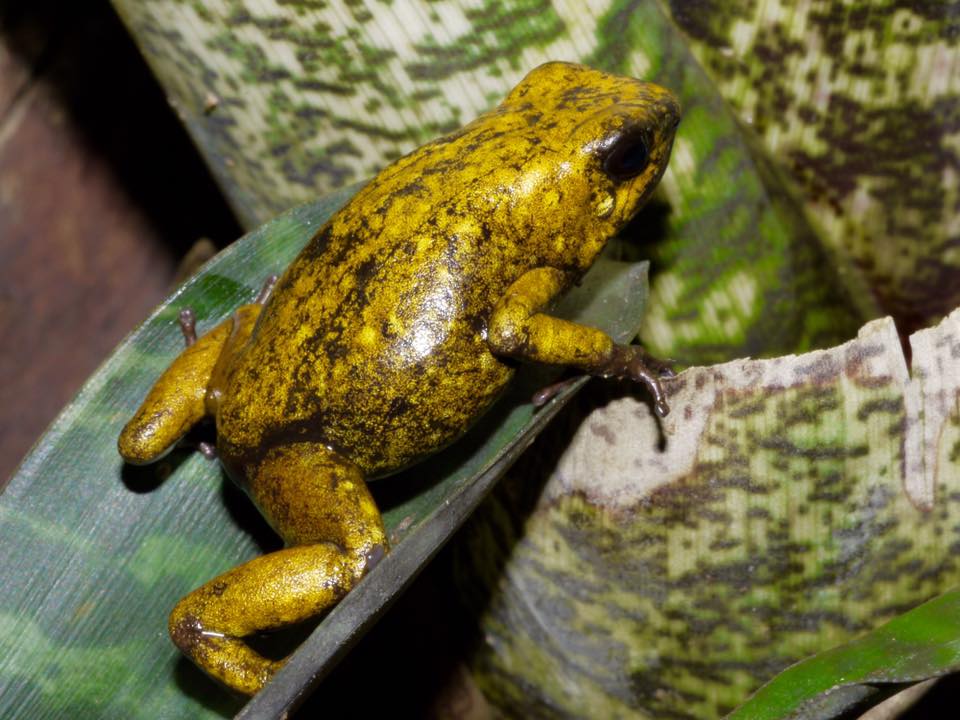 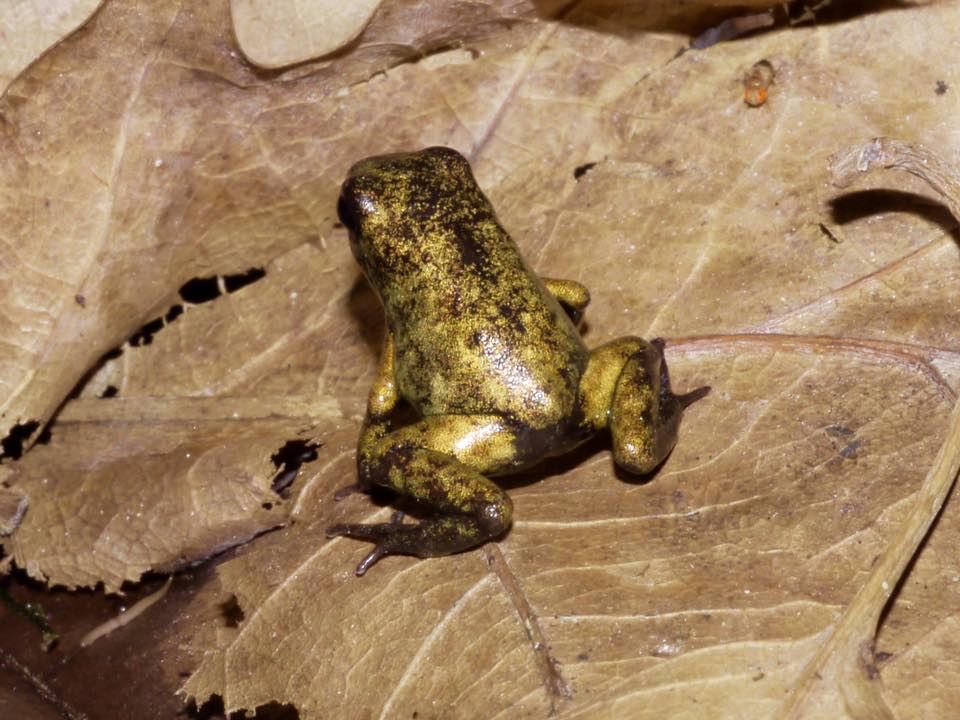 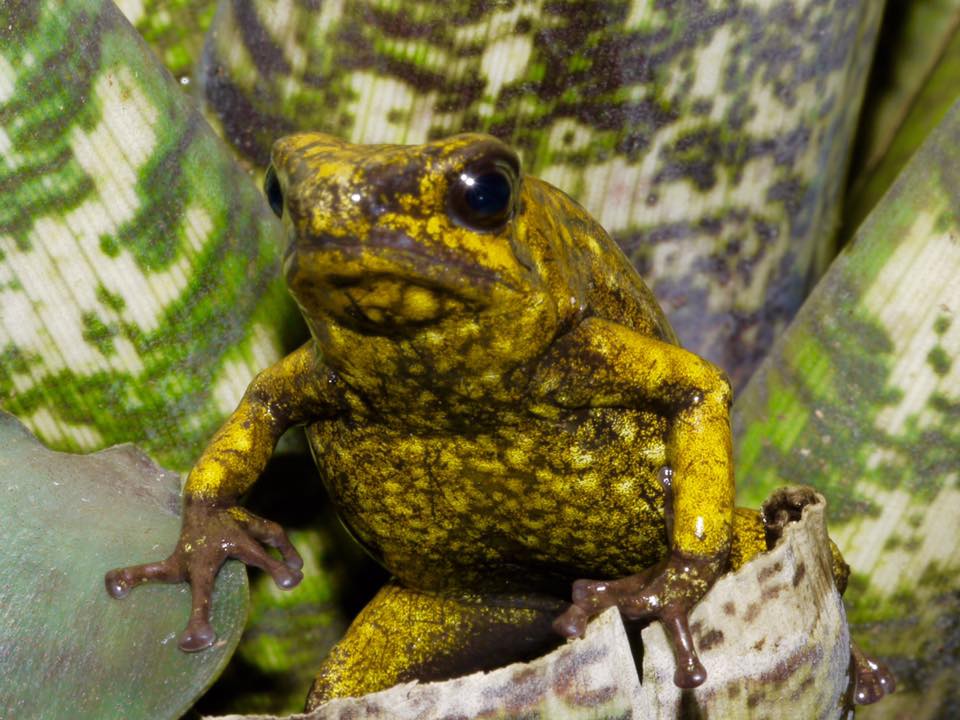 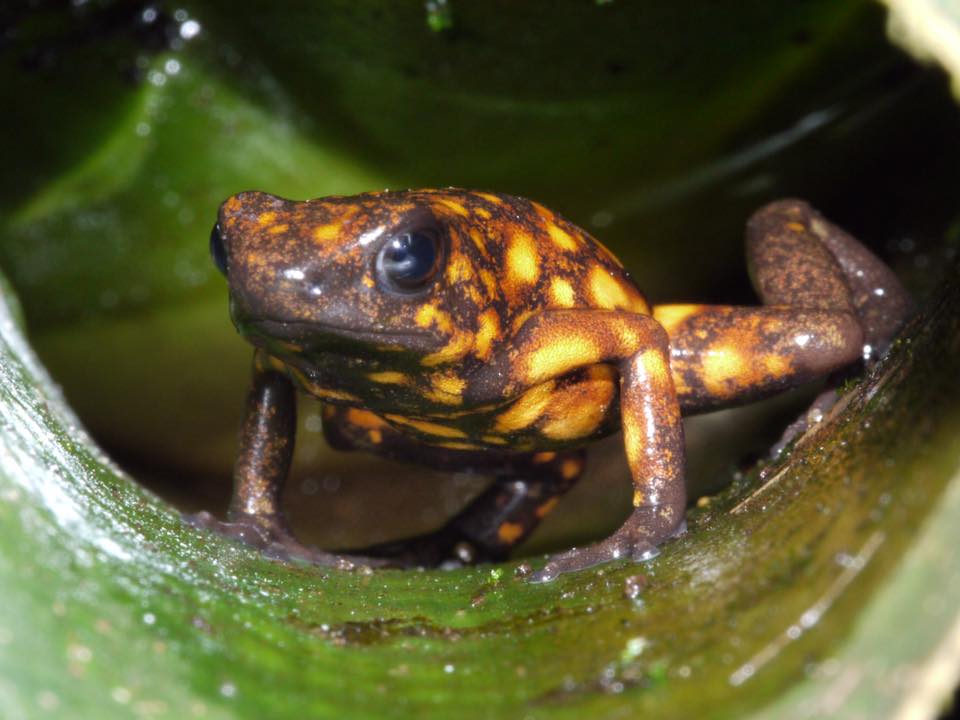 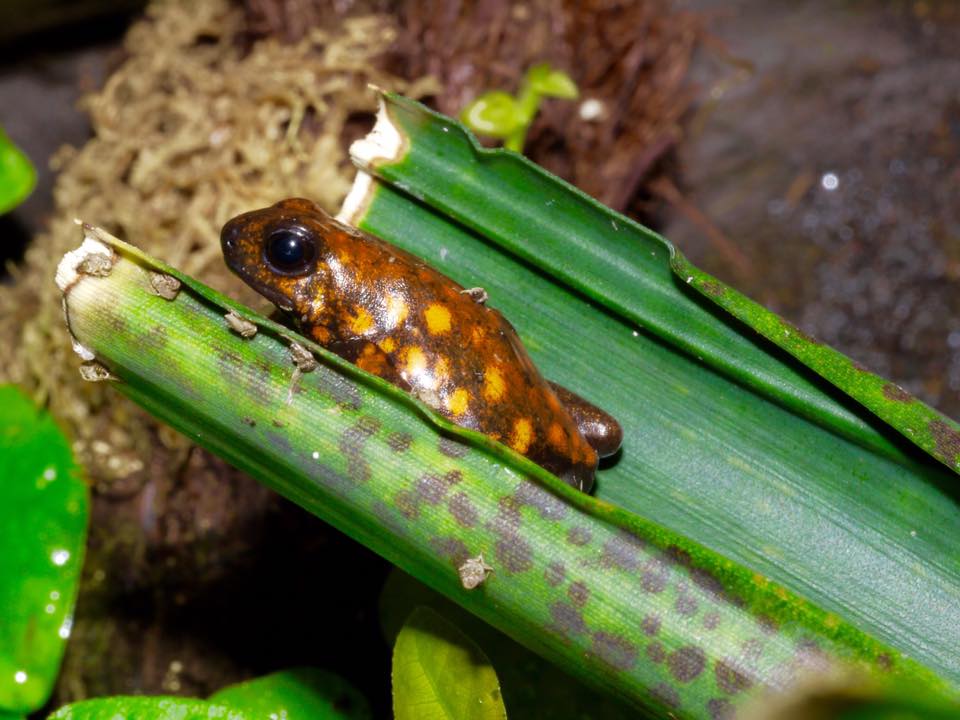 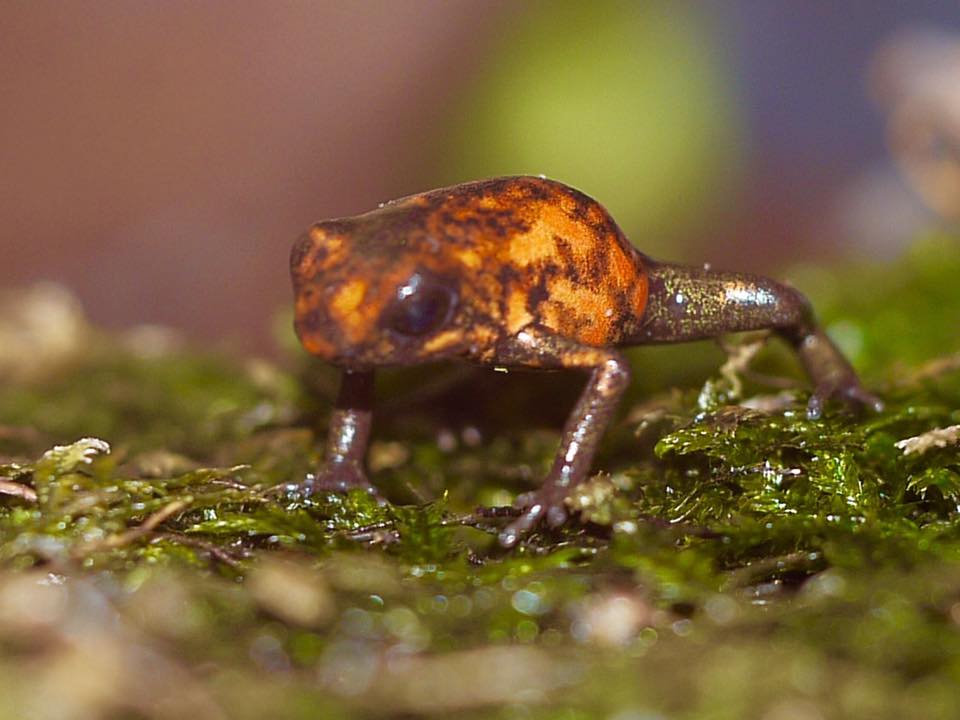 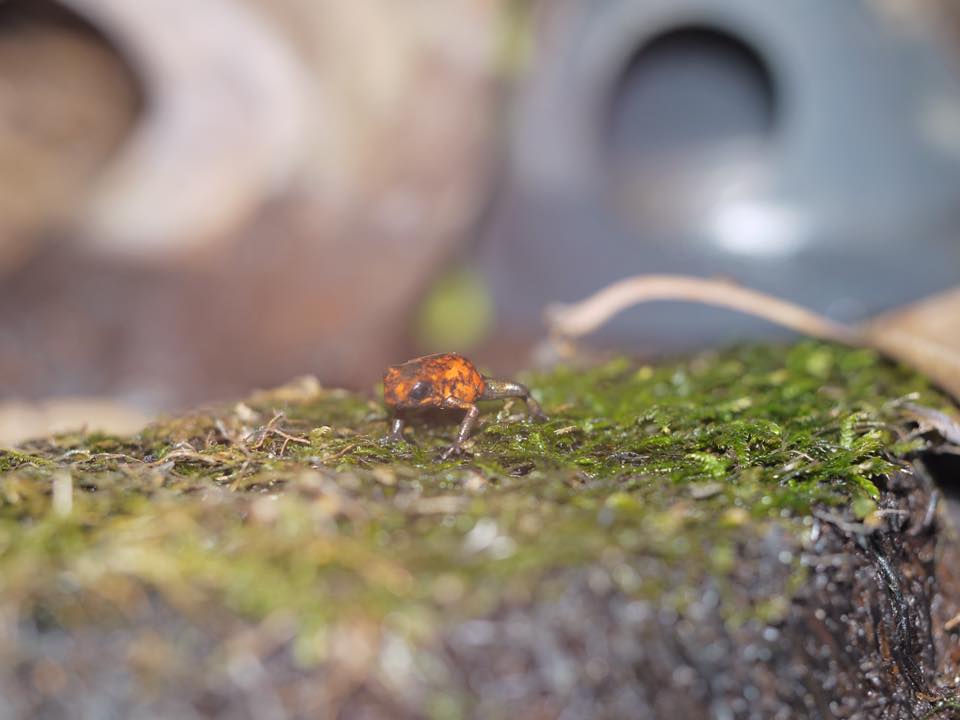 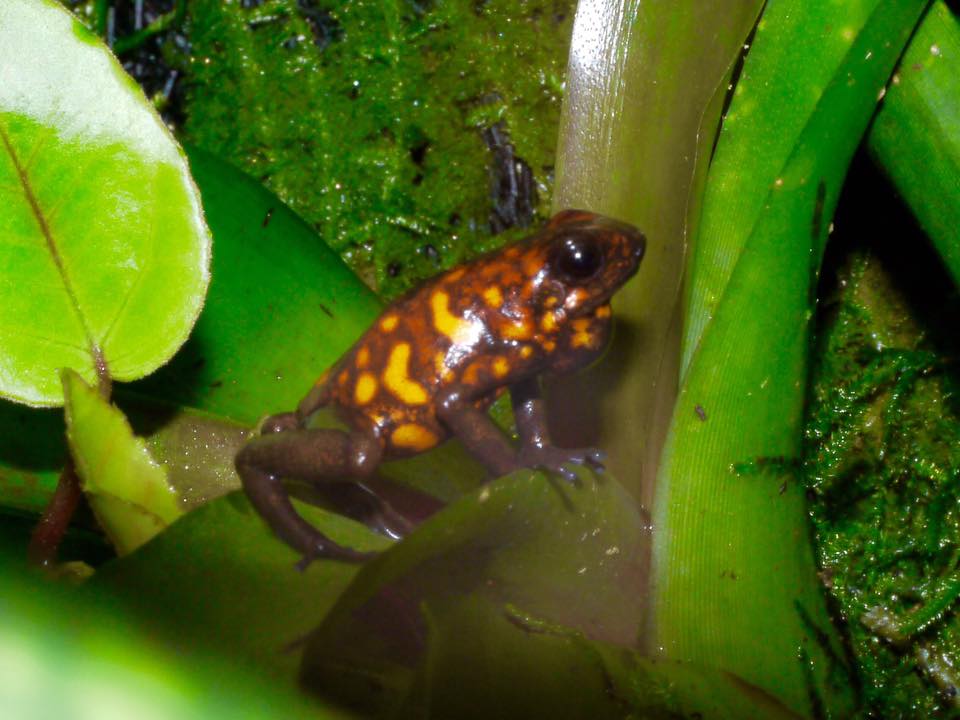 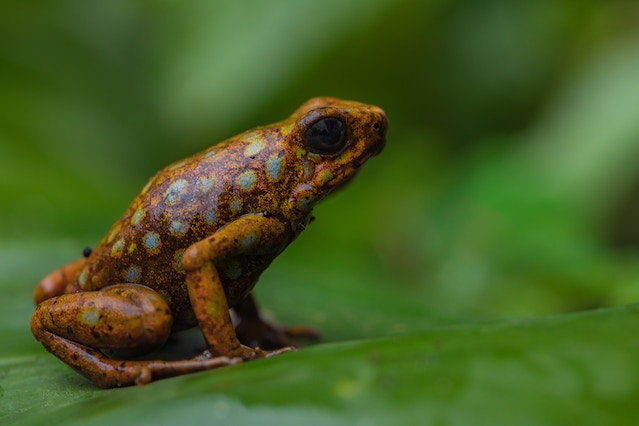