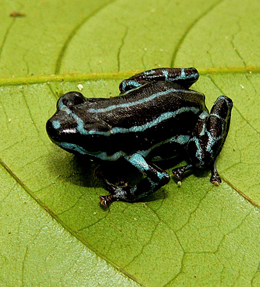 This species is known from two localities less than 1 km apart in the eastern Sierra del Divisor, Loreto, Peru. These localities are between 300-400 m elevation in the lowlands at the base of these mountains. View type locality in Google Maps.

Natural history data on this species are very limited. Only two individuals were observed, both of which were foraging in the leaf litter, which is notable because other members of this group are typically found climbing plants. This species may breed in Heliconia axils, as these were found in abundance in the type locality.

Following IUCN criteria, this species should be listed as Data Deficient, as it is only known from the immediate vicinity of the type locality. This area is very remote and habitat loss is not currently a threat.

Ranitomeya cyanovittata is sister to R. yavaricola, and is a member of the vanzolinii genetic group. This species was discovered by Diego Vasquez while he was participating in an expedition conducted by Pacific Stratus Energy S.A., which used helicopters to access the type locality.