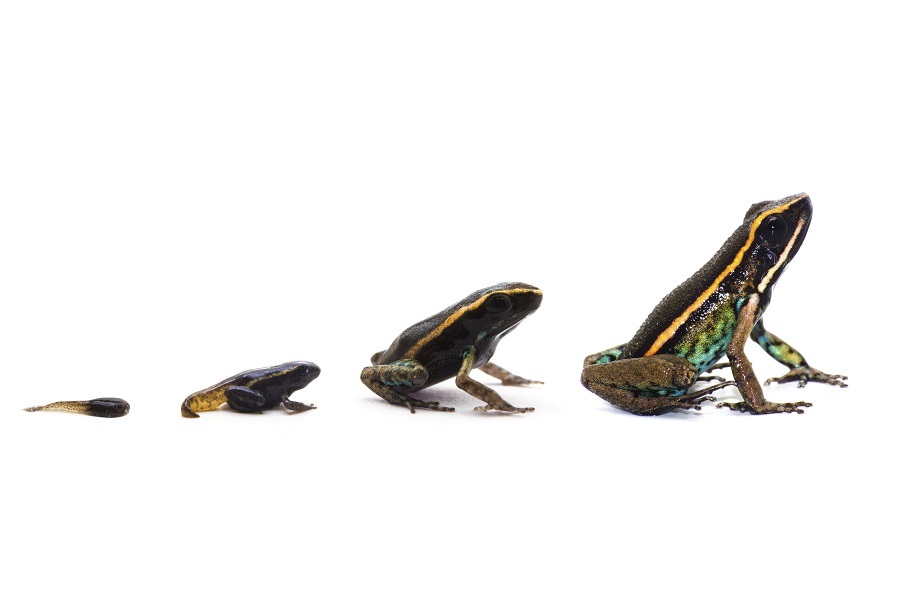 Abstract. We describe and name a new species of poison-dart frog from the Amazonian slopes of the Andes in Manu Province, Madre de Dios Department, Peru; specifically within the Amarakaeri Communal Reserve and the buffer zone of Manu National Park. Ameerega shihuemoy sp. nov. is supported by a unique combination of characters: black dorsum with cream to light orange dorsolateral lines, blue belly reticulated with black, and the lack of axillary, thigh and calf flash marks. Within Ameerega, it shares the general appearance of A. altamazonica, A. boliviana, A. hahneli, A. ignipedis, A. petersi, A. picta, A. pongoensis, A. pulchripecta, A. simulans, A. smaragdina, and A. yungicola; each possessing a granular black to brown dorsum, a light labial bar, a conspicuous dorsolateral line running from the snout to the groin, and a metallic blue belly and underside of arms and hind limbs. From most of these species it can be distinguished by lacking flash marks on the axillae, thighs, and calves (absent in only A. boliviana and A. smaragdina, most A. petersi, and some A. pongoensis), by having bright cream to orange dorsolateral stripes (white, intense yellow, or green in all other species, with the exception of A. picta), and by its blue belly reticulated with black (bluish white and black in A. boliviana, green and blue with black marbling in A. petersi, and green and blue lacking black marbling in A. smaragdina). Its mating call also shows clear differences to morphologically similar species, with a lower note repetition rate, longer space between calls, and higher fundamental and dominant frequencies. Phylogenetic analyses based on the 16S mitochondrial rRNA fragment also support the distinctiveness of the new species and suggest that A. shihuemoy is most closely related to Ameerega macero, A. altamazonica, A. rubriventris, and two undescribed species (Ameerega sp. from Porto Walter, Acre, Brazil, and Ameerega sp. from Ivochote, Cusco, Peru). Genetically, the new species is most similar to the sympatric A. macero, from which it clearly differs in characteristics of its advertisement call and coloration. The new species is found near rocky streams during the dry season and near temporary water bodies during the rainy season. Tadpoles are found in lentic water along streams, or in shallow, slow-moving streams. Given its small geographic range, we recommend that A. shihuemoy should be considered ‘Near threatened’ (NT) according to IUCN Red List criteria.
Source: http://www.mapress.com/j/zt/article/view/zootaxa.4221.1.3